If you have been following us for a while, you may recall last year when we picked up a few truckloads of pumpkins to feed the pigs.  This year, we thought, "Why not buy 1,000 pumpkin seeds of  many varieties and plant them for pig food?!"  So in early June, Jim got the old disc out of the barn and gave the fields hell. 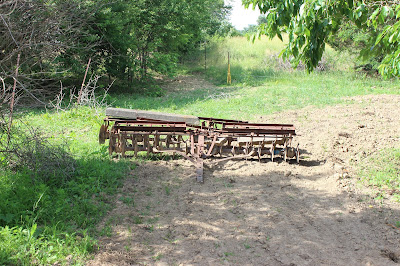 In fact so much hell on that very dry ground of early June, that the old disc was worn out and we purchased a "new to us" disc for future use. 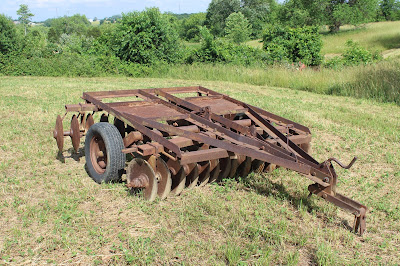 We ended up planting about 2 acres, all planted by hand.
It worked out well with the wet summer we had and the pumpkins grew well. By mid-September, pumpkins were plump and in need of picking before the other wildlife around the farm got too hungry.
Little boys had fun picking the little ones, and the those that were as big as they could handle.  We stacked some of them in the barn for storage, but it would seem the rodents loved the taste of them too.
Now, a couple months later, little boys still enjoy the excitement of the tasty pumpkins as their daddy or poppa launches one in the air at just the right trajectory for a big explosion of guts when it lands; perfect for little pigs to dig in and devour.