Necropsy (Autopsy) On a Pig

This is not something I ever imagined doing on one of our pigs, or any animal I owned for that matter.  It is with sadness and serenity I write this post.  Crybaby, our first boar and sire to our many litters, was found dead yesterday morning.  In an effort to be transparent, I write this post to illustrate the hardship we and many other small farmers endure on the farm and give a realistic picture of farm life and the efforts we take to keep happy, healthy animals.  While we raise many of the animals knowing their fate, our breeding stock we become much closer to.  This post is not meant for seeking sympathy, but to help the reader understand our care and compassion toward our animals and create awareness of the challenges small farmers face.

As I first mentioned, I never imagined performing a necropsy on one of our pigs to figure out what caused it's death, but there were some unique circumstances here.  About 2 months ago, Crybaby began to have a mild cough.  We know pigs are sensitive and can often experience similar illnesses we experience as humans.  A few weeks later he had a runny nose and started to lose weight when the rest of our pastured breeding stock were still maintaining healthy weights.  Suspecting pneumonia, we treated him with antibiotics hoping to help him get better.  (We don’t use antibiotics on our animals unless they are sick and need them to get better.)  His runny nose improved, but returned 10 days later.  We had our vet come out and he treated him with a stronger/different antibiotic and gave him some additional vitamins.  We isolated him from the other pigs and gave him more feed.  He put the weight back on and was looking much better.  Two weeks after that vet visit, Crybaby became lethargic again with poor breathing.  At this point the theory was he had ingested or aspirated something that had become lodged in his trachea or the esophagus (not unusual for pastured animals).  We treated him again with antibiotics and a steroid and discussed a costly procedure of sedating and scoping his throat for something caught, but our experienced vet explained the risk and that he may not survive the sedation (pigs are very sensitive).  We were encouraged to wait and see what happened.  As fate would have it, his discomfort did not last long and here we are.

While it probably isn't normal for farmers to perform such a procedure on their animals, Matt and I wanted to know if there was anything more we could have done for him.  Having our vet perform such a procedure is not in our budget.  We have an understanding of anatomy on a pig from processing our own personal consumption meat.  I'll spare you the details and visual documentation, but from this procedure we learned that his lungs were filled with foamy fluid, and more importantly, we found a mass on his larynx bigger than Matt’s fist.  With where it was, it made sense that this mass is what we believe was putting pressure on Crybaby’s airway and more than likely he choked or asphyxiated due to it.

We know we did the best we could in treating him and bringing the vet out more than once.  There was nothing more we could have done that would have been economically feasible, or fair to the animal.  It is a difficult life lesson knowing we can’t always save them.

It's sad for our family and our farm as Crybaby was a gentle animal that sired great litters. He was just hitting his prime at almost 2 years old. We'll grieve a bit, but we will move on, as we must.  Tomorrow is another day and we are grateful for the live pigs we have.  Who knew that the little boar pig we brought into our home this time last year, and named Bacon, would become the remaining boar we now depend on to breed our current sows.  I thanked my mom today for encouraging us to rescue Bacon last year.  Sometimes things don’t make sense to us when they happen, but with time, the plan from the universe unfolds and the importance of certain events becomes evident.  R.I.P. Crybaby.  11-30-2014 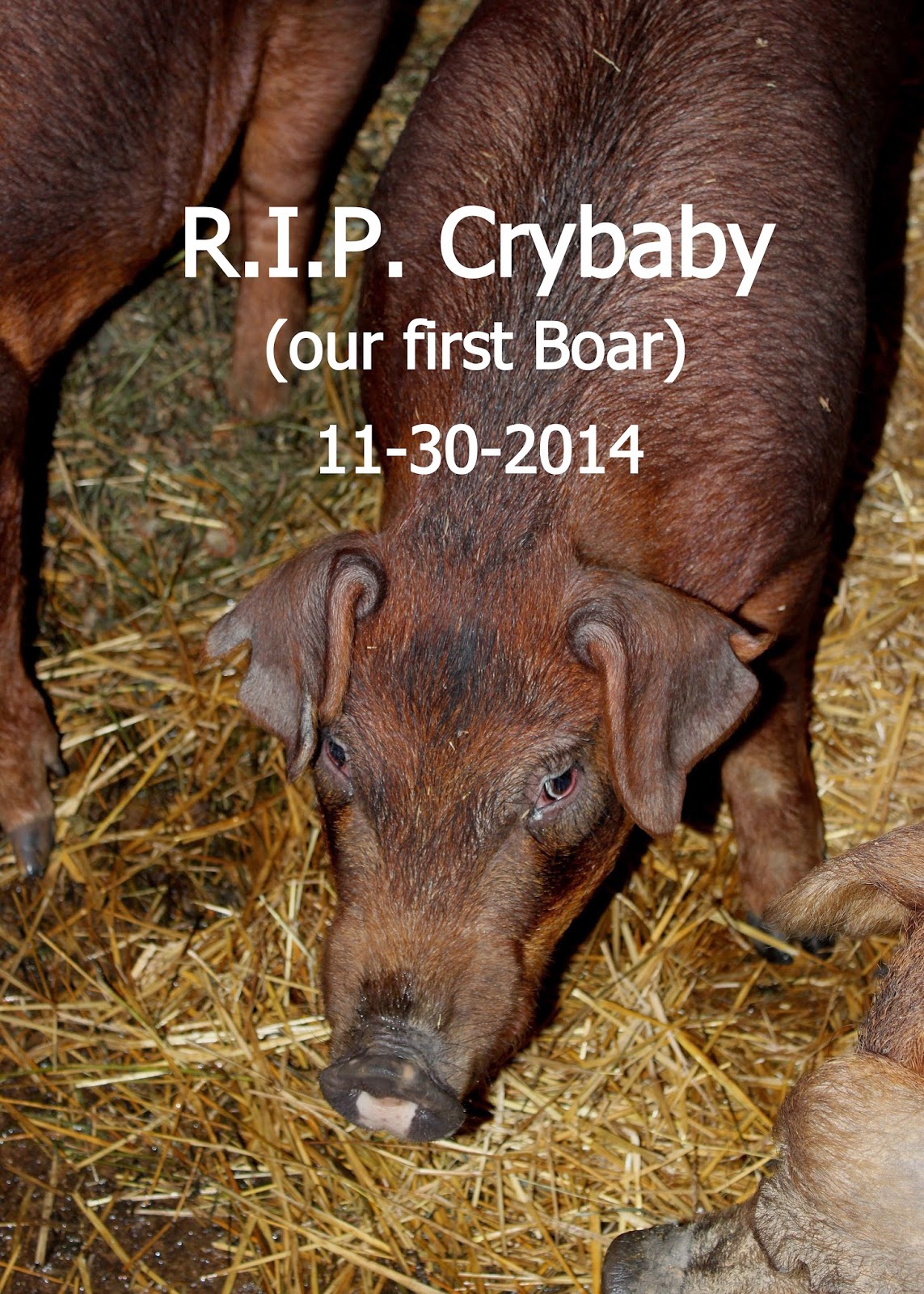