Having pigs has changed my holiday decor.  You see, before pigs, I would not have owned a light up Santa pig for my outdoor decorations, and I sure as heck wouldn't have had it on my front porch greeting my guests. 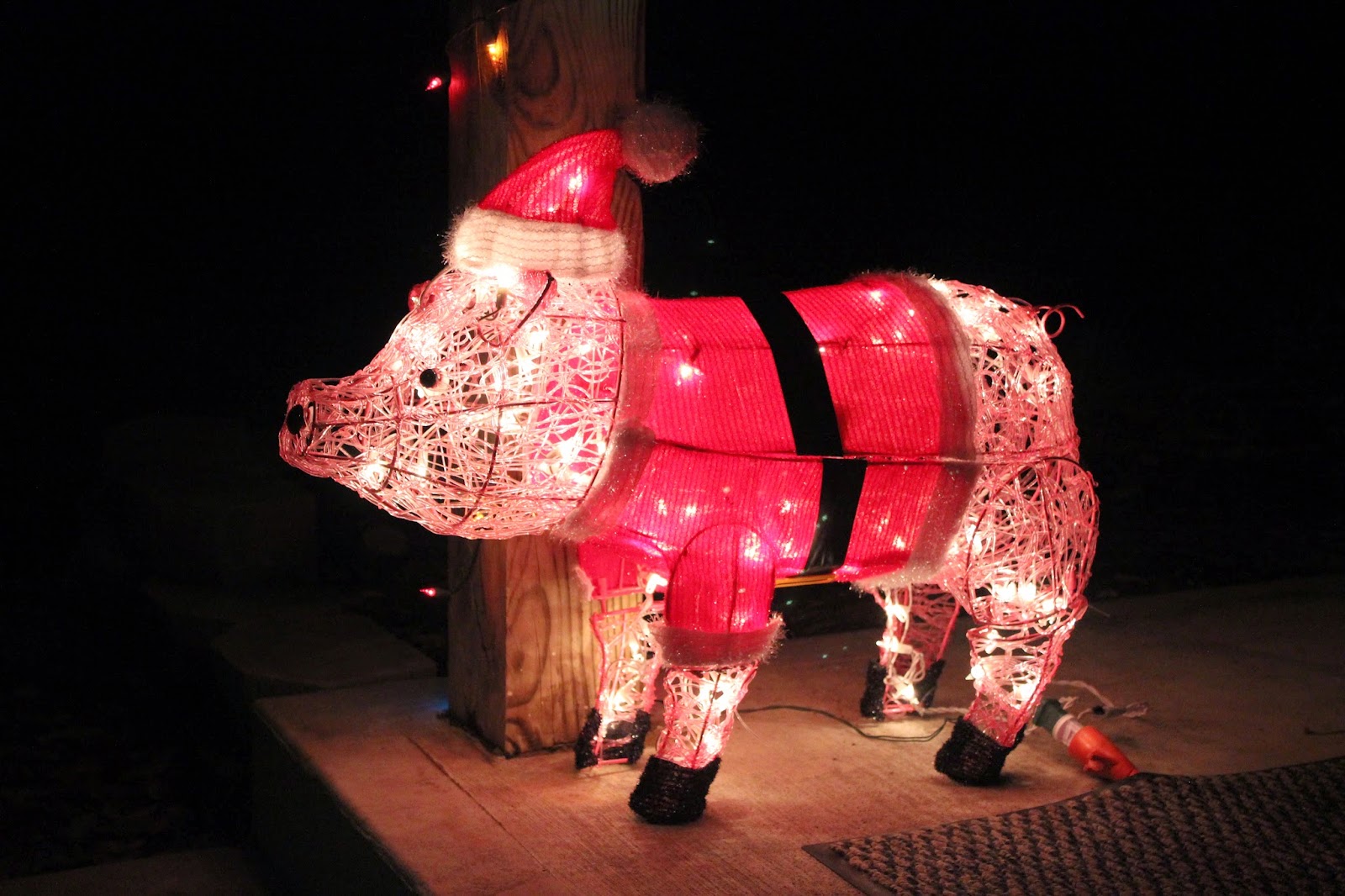 That would have been the kind of thing someone got me as a joke.  (Ha, ha, bet you won't put this up in your yard.  Hee, hee, hee.)  Now that we raise and sell pigs, I saw it marked down 70% after Christmas last year and thought, "Hey, we need one of those, it would be great since we just started selling pork."  My in-laws got one too and have it out by the barn this year. 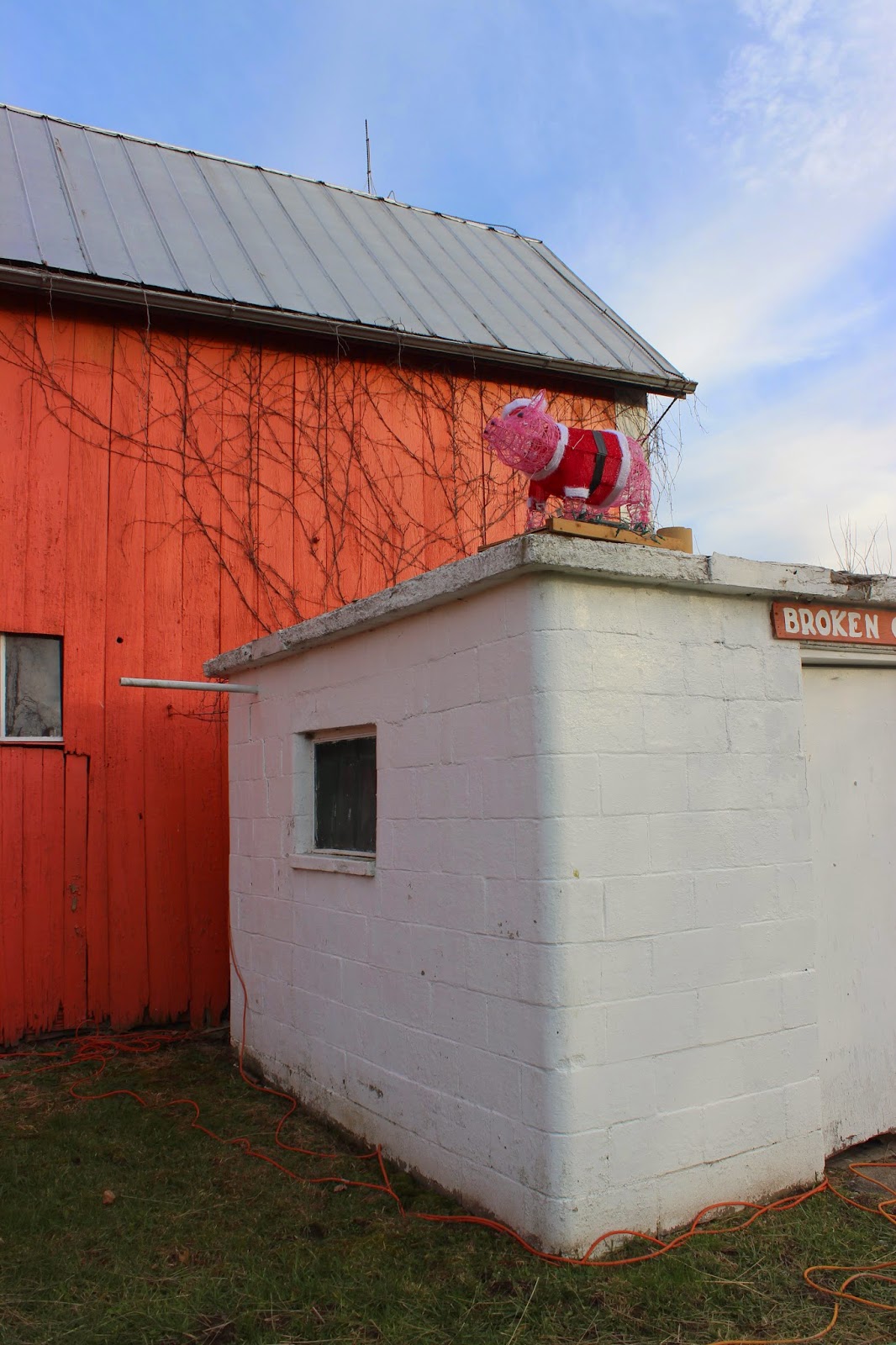 But it isn't just lights, now it is about ornaments too.  Last Christmas, Matt's Aunt gave us a really cool, and really thoughtful, glass ornament of a pig, showing the various cuts.  It was so cool because she wrote on the box, "Fork Right Farm Est. 2013."  We were excited to put in on our tree and Matt even took a pic of it with his phone and sent it to her to share our excitement. 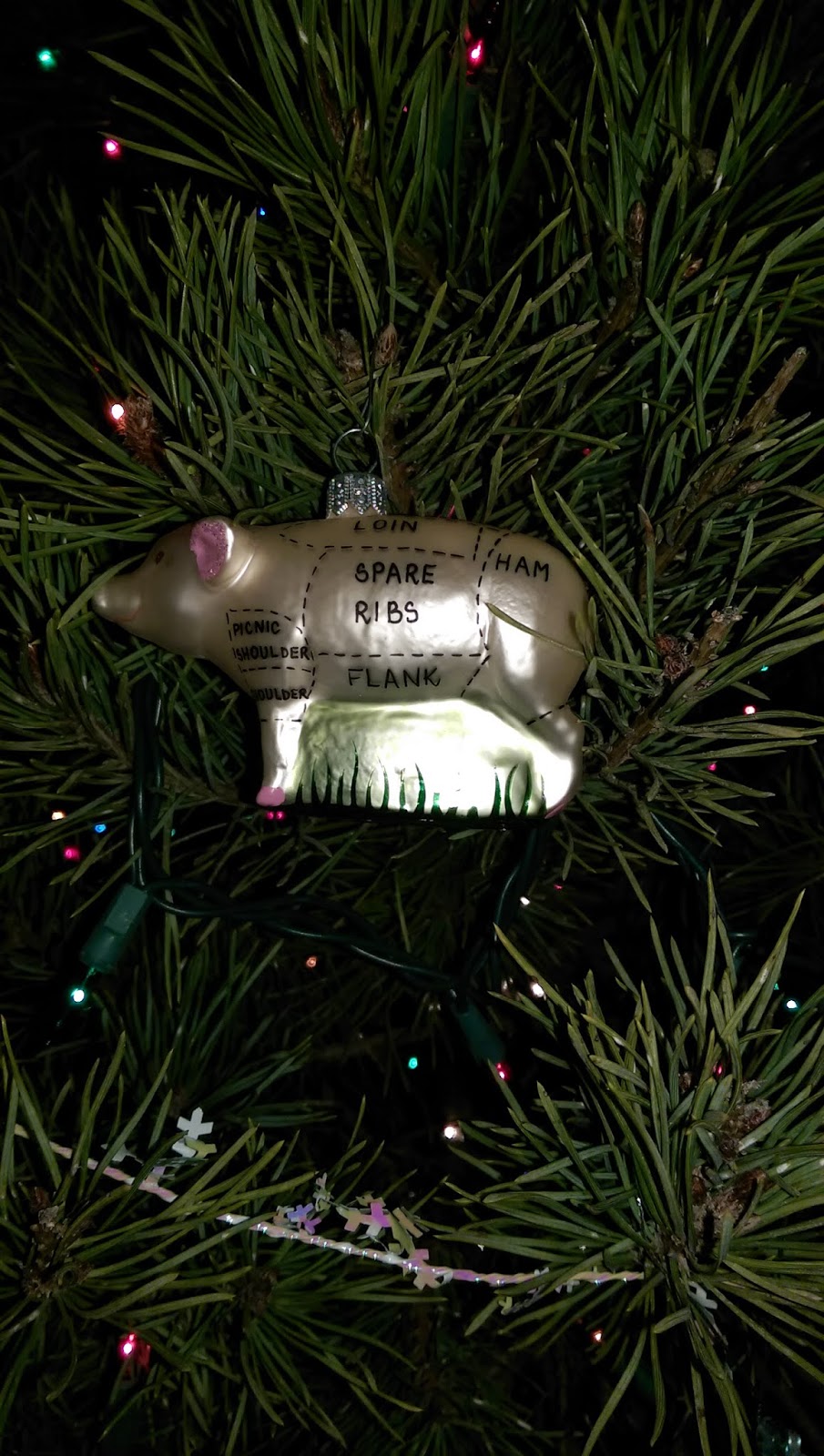 Well, it was a good thing he got that photo.  At 2 a.m. I woke to an awful crash and the sound of breaking glass.  The sound was unmistakable after years of having cats when I was growing up.  Our tree had fallen over and among the ornament casualties was our piggy ornament. 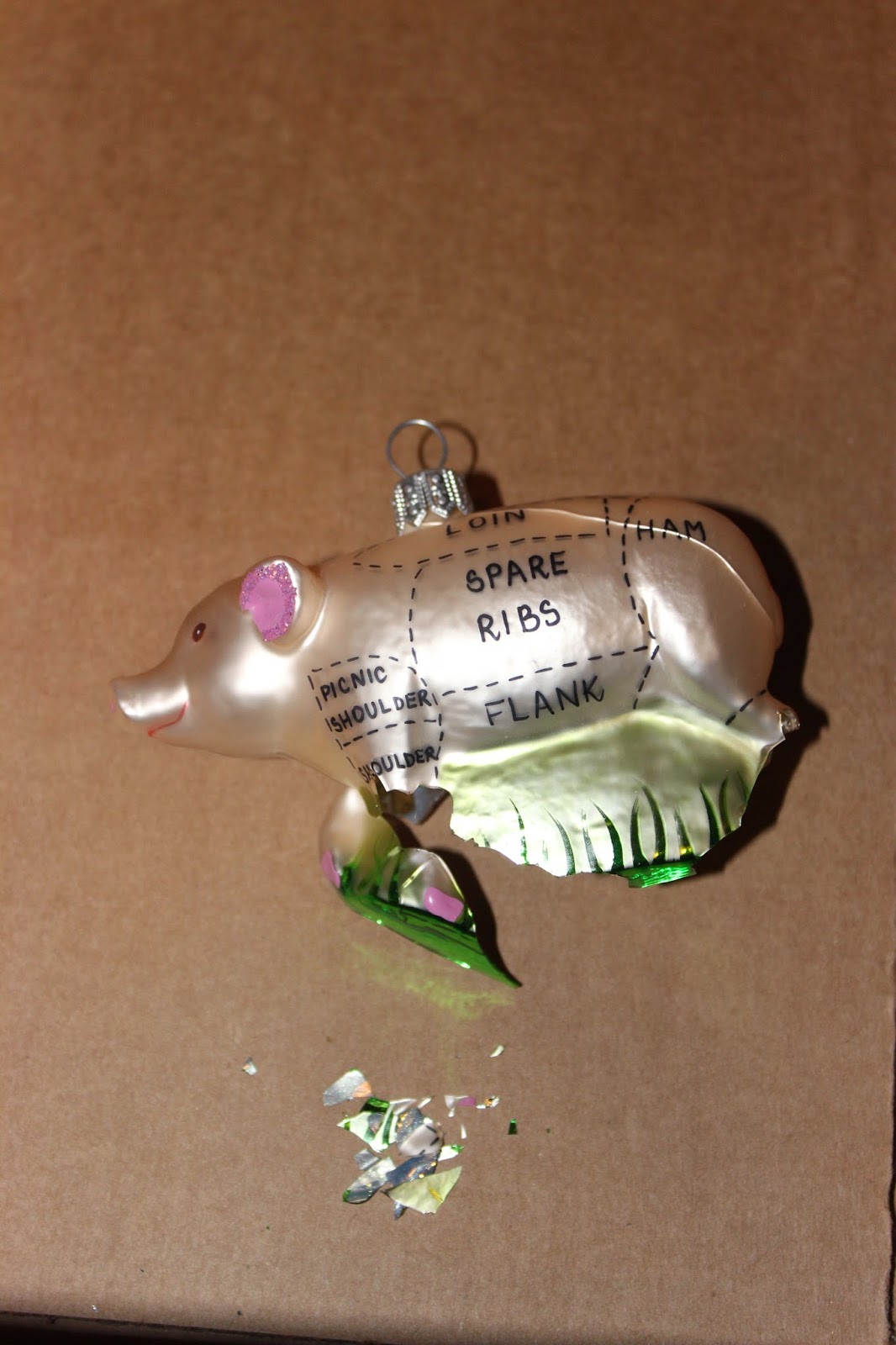 Our tree rig has been re-engineered to prevent future crashes and I'm certain a toddler could now climb it due to the aircraft wire from a hook in the ceiling running half way down the tree with zip ties to the trunk in 3 places.  (don't get any ideas boys!) 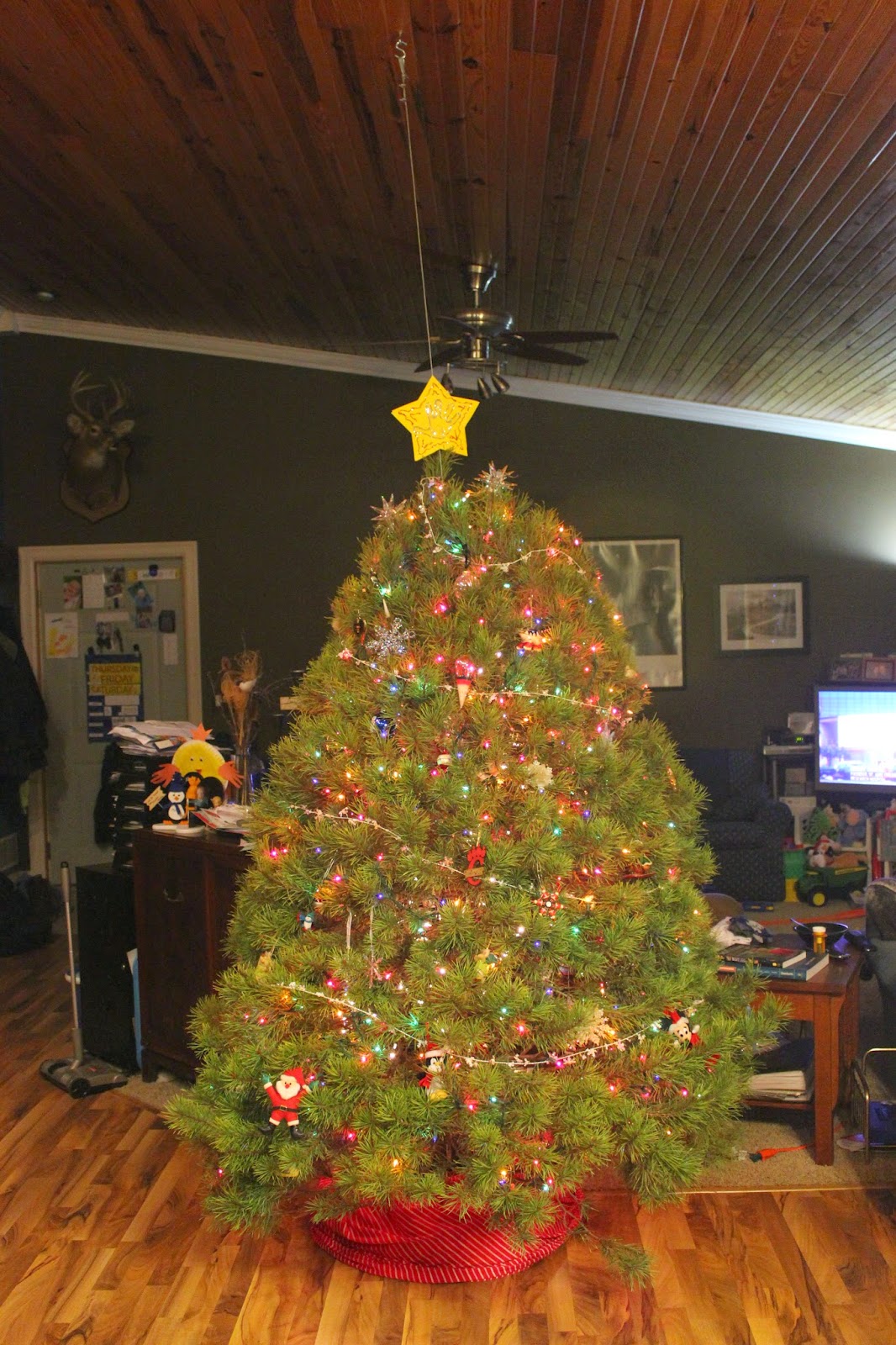 Next on my to-do list, Christmas cards.  You can bet there will be pigs on them.
Posted by Sharlena at 11:03 PM