We have a piglet in our house.

As much as I could probably say that about my 2 year old who loves to eat, I’m actually referring to a baby pig that is living in our shop.  Meet Bacon! 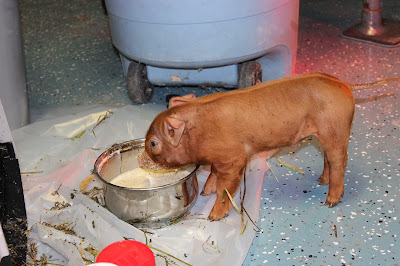 (Important Warning:  Yes, he is cute.  No, he is not a pet.  Yes, his goal is to grow up and become bacon.  Some people may struggle with the reality of that comment, but it is important to Matt and I that our children grow up understanding where their food comes from and that whole circle of life thing.  This is all a part of it.  You won’t want to eat Wilbur, but Bacon sounds better.)

If there were a happier story to tell, I wouldn't be feeding a piglet under my roof.  Mama sow hurt her leg back in November.  There was severe swelling, but since she was so close to delivering her piglets, there was not much we could do for her without jeopardizing the piglets.  All we could do was pen her in the barn so the other pigs weren't running in to her.  About 10 days ago she delivered her piglets, but about half were stillborn, probably the ones on the side she was laying on all of the time.  Since she couldn't get around well, she had stepped on the others.  This little guy was the last one left and although we swore we wouldn't intervene, his fate was almost certain if we left him.  It isn't that this sow was a bad mama, we attribute it to an unfortunate series of events.  As we have said before, farm life is tough.  This isn't how we envisioned our business starting, but it is what it is.

Now on to a happier discussion…so what do you do with a 10 day old pig?  You feed it and keep it warm!  He gets milk replacer mixed with some high protein feed about every 6 hours.  This is much easier than the orphan foal I adopted in high school that had to be fed every 2-3 hours for the first couple weeks.  You have to understand that this kind of thing runs in my genes.  Growing up, my mom was always bringing home baby animals that we would care for.  Her childhood was the same.  They lived in the suburbs but Grandpa would bring home calves, lambs, piglets, etc. for various reasons since the family farm was an hour drive from their home.   I think it will help our children also learn to be kind to animals and respect them.  The boys are still a little young for that lesson, but I’m sure they will have more opportunities to learn. 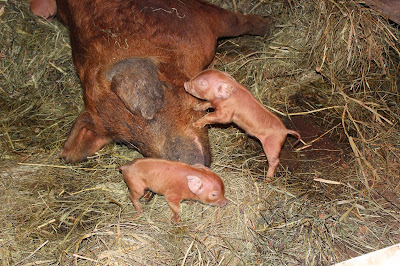 Extracting Bacon from his pen was interesting.  Pick up a baby pig and it starts to squeal.  Matt handed me a box and told me to grab the piglet while he tried to corral mama.  The way out was through the rails into the feeder that was formerly used when there were cattle in the barn.  Needless to say, I dove through the rails while holding the piglet and pulled my legs through just in time before mama sow could get to me.  Her leg is in bad shape, but she wanted to protect her baby.  It was time to get out of the barn.  I took Bacon up to the house and found a better box to transport him in. 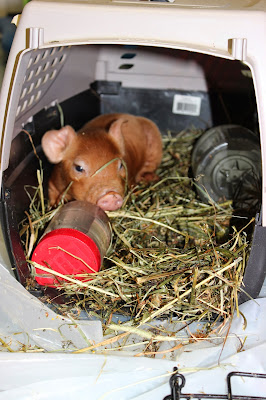 He is now settled in nest of hay with a few sealed bottles of warm water to snuggle up to and he is learning to drink from a pan.  It might take a few days for him to adjust, but he’ll do fine. Our boys are intrigued by the little pig, even the 6 month old. 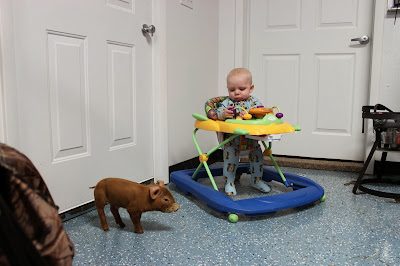 The next litter of piglets is due anytime, probably in the next two weeks.