Winter is here with all of her snowy glory.  Mother Nature gifted us 6-8” of snow this weekend; a soft blanket muffling all sounds.

Nights have gotten colder and it was time to relocate our rooster to a warmer place (No, not the oven.)  The life of free range chickens can be hard in the country.  Our venture with chickens began last March.  We received a rooster and 4 hens.  Matt built a coop, got a nest box and built a feeder.  Our, then 1.5 year-old, son loved them.  He would follow and chase them all though the yard and hand feed them corn.  These were nice chickens, nothing like I remember as a child when I was chased and pecked by a hen. 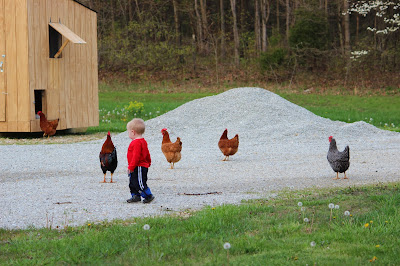 We had grand intentions of building our flock, thinking one of these hens would take to sitting and hatching eggs for us.  When that wasn’t looking probable, Matt built an incubator.  Apparently not all of the eggs were viable, but we had a few hatch.  At one point we had 9 chickens, and then our numbers began to dwindle.  Hawks got a few over the course of the summer and finally a week or two ago  all of the young ones went missing; could have been a fox, dogs or coyotes.  Only poor Roo-Roo was remaining.  Life on the farm can be tough.

Matt put a heat lamp in the coop to help Roo stay warm until we could relocate him.  He was no dummy; we had a few issues with him roosting in the garage at night when he managed to get himself locked in as we were coming or going.  Since the sun was already down when we spotted him, there was no way we could get him out until morning.  (I found it especially funny the night Matt had to catch an early morning flight and we didn’t know Roo was in the garage.  When he turned on the lights in the garage to leave at 4 a.m., Roo began to crow and scared Matt half to death.  Thankfully he got quiet again when we turned off the lights and Roo’s crowing didn’t wake the boys.)

Yesterday Matt caught Roo and took him to his cousin’s house where he could winter with some other chickens and not get lonely.  This morning when my 2 year old insisted we get up at 6 a.m., the yard was quiet.  No Roo-Roo cock-a-doodle-doo-ing this morning, or peering in the windows.  Just a blanket of white snow greeting us with dawn. 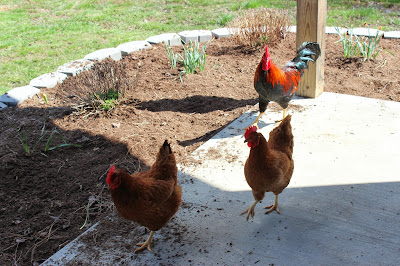 I’ll admit, I enjoyed watching the chickens.  They were entertaining for us, and a fabulous experience for our son.  I look forward to having chickens again, but hopefully the next ones don’t spend time on our front porch or dusting themselves in my flower beds scratching my flowers from existence. 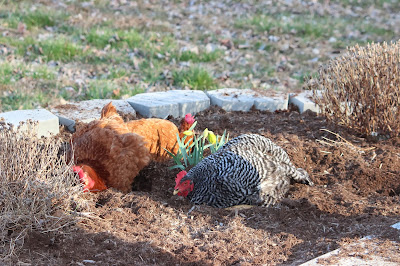